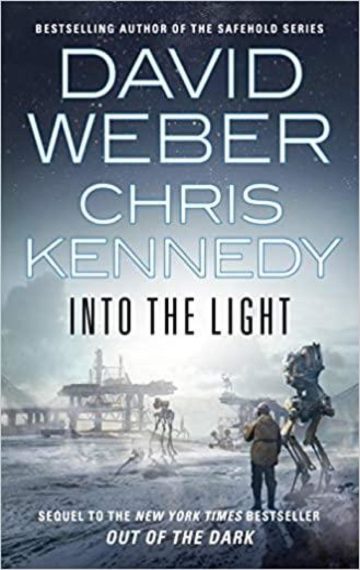 In New York Times-bestselling science fiction epic Out of the Dark, Earth beat back an alien invasion. Now we’ve got to make sure they don’t come back, in Into the Light.

The Shongairi conquered Earth. In mere minutes, half the human race died, and our cities lay in shattered ruins.

But the Shongairi didn’t expect the survivors’ tenacity. And, crucially, they didn’t know that Earth harbored two species of intelligent, tool-using bipeds. One of them was us. The other, long-lived and lethal, was hiding in the mountains of eastern Europe, the subject of fantasy and legend. When they emerged and made alliance with humankind, the invading aliens didn’t stand a chance.

Now Earth is once again ours. Aided by the advanced tech the aliens left behind, we’re rebuilding as fast as we can.

Meanwhile, a select few of our blood-drinking immortals are on their way to the Shongairi homeworld, having commandeered one of the alien starships…the planet-busting kind.

At the Publisher’s request, this title is being sold without Digital Rights Management Software (DRM) applied.